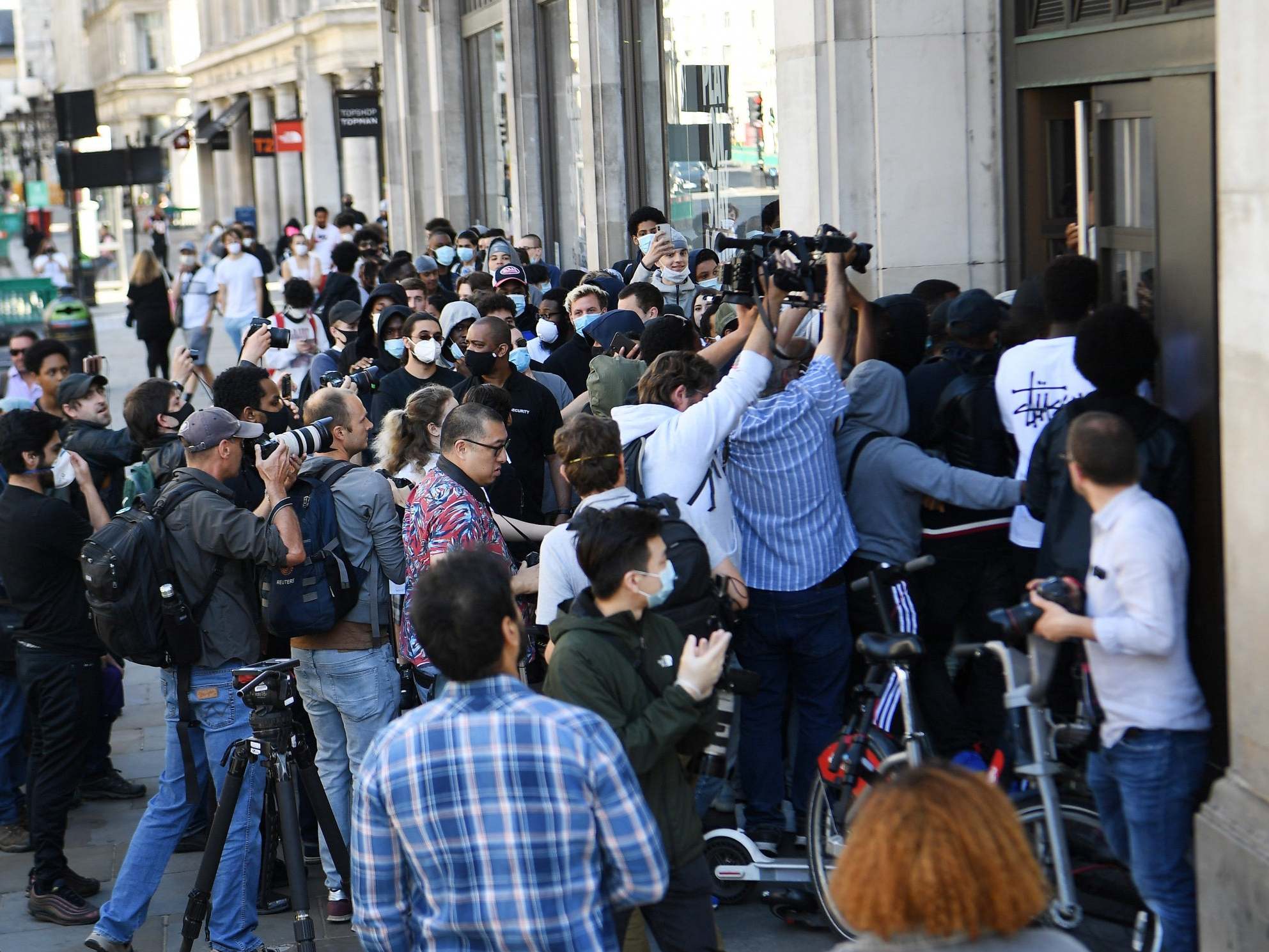 Long queues formed outside high street shops on Monday as non-essential stores reopened for the first time since lockdown began in March.

Shoppers were faced with a very different environment as retailers grappled with the difficulties of keeping people safe while encouraging them to spend money.

Among the changes: closed-off changing rooms, lots of Perspex screens, and shoes going into quarantine after you touch them.

Many shops remained closed as retailers test out how their stores function with the new social distancing rules in place.

Next, for example, opened just 25 of its 500 UK stores on the first day. John Lewis reopening two branches in Poole and Kingston-upon-Thames, while Argos opened 145 out of more than 800 stores.

Primark took a different approach, reopening all of its 153 stores, and enjoying crowds at several of them, including its flagship Oxford Street store in London. The budget clothing specialist has been hit harder than most by the lockdown as it does not have an online storefront, meaning goods have been left stacked up in warehouses or on shelves.

One shopper at Birmingham’s Primark store said it had been “a delight” to return to the city centre shop, which like other stores saw large queues that morning.

She told the PA news agency: “It took a long time but I bought a lot of dresses, nightwear and bras. I have missed it a lot and I’m really happy.”

Other shoppers were less pleased with the extended queues. Kristina Taylor, 40, who works in finance, told PA: “I just need to have my screen protector replaced, that’s all. It’s just something that has been niggling me since day one.”

Asked if she was pleased about shops reopening, she said: “Yes and no.

“I will pop by Primark to see the queue. But not keen on all of this queueing, it makes me think twice about whether I need something from that shop.”

Certain shops face particular challenges in complying with government guidance, such as shoe retailers which now have to “quarantine” pairs that customers have tried on.

Changing rooms at most clothes shops remained closed while bookshops took items off shelves after people have touched them. Waterstones will only return items to the shop floor after 72 hours.

Shops are required to install screens at checkouts and mark two-metre distance intervals on the floor to help customers stay apart. Retailers including Ikea and John Lewis have introduced social distancing wardens to help with this.

As with supermarkets, numbers within non-essential stores will be strictly limited, meaning shoppers will be faced with queues outside.

Government ministers have also tried their best to give people the confidence to return to high streets and shopping centres. Paul Scully, minister for small businesses, told BBC Breakfast: “The high street is going to be a different place to what it was before, with the one-way systems, with the hand sanitisers, and with people not trying clothes on in the same way.” He echoed Boris Johnson who said on Sunday that people “should shop and shop with confidence”.

Shops have been asked to encourage customers to shop alone unless they need extra assistance and to adjust routes around stores to minimise congestion.

Given the constraints in place, retailers face a tough challenge encouraging some reluctant consumers back into stores.

While there is likely to be some pent-up demand as people have the chance to browse and shop in a way they have not been able to since March, millions of consumers remain wary of public spaces while others are concerned about their finances.

Indications from other countries is that footfall on high streets will, unsurprisingly, increase as shops reopen but that this may not translate into sales.

That puts Britain’s struggling high streets in an even more perilous position as shops face high costs on rents and wages, for example, but greatly reduced revenues.

David Fox, co-head of retail at property advisers Colliers, said: “Due to the social distancing measures and strict government protocols that retailers need to adhere to, there will be a mismatch of customers desire to shop and businesses ability to meet the demand.

“The difficulty for retailers will be the logistics of the new health, safety and hygiene policies within the stores, with skeleton staffing to manage queueing and perform their sales duties.”

Those shoppers who do venture out may be able to pick up bargains, particularly if they can hold off on purchases for a couple of weeks.

Primark revealed recently that it had £1.9bn-worth of items in stock, more than double the amount it would usually hold. By one estimate, fashion retailers have around £15bn of unsold garments. Shoppers may be able to take advantage of heavy discounts as chains try to sell this excess before it falls out of fashion.

However, some experts think retailers will hold off before slashing prices. Lisa Hooker, consumer markets leader at consultancy firm PwC said it was unlikely that consumers would see “wall-to-wall sales” this week.

Ms Hooker predicts a bounce in sales this month. “If June trading does not make a big enough dent in stocks, we predict a rush of promotions and sales later in the summer.”

Oxfam said charity shops are likely to be packed with “gems” as they reopen this week and fill up with items that people have cleared out during lockdown.